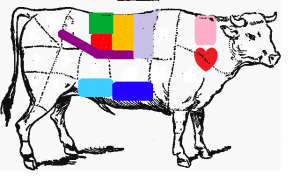 There really isn’t much to report on the eating of a T Bone steak called – beef de costilla and short ribs called tira de asado. Both were delicious.

The thing I found most interesting the atmosphere in the parilla.  We went to a restaurant called El Viejo Jack. Not only is it highly recommended in guide books and on Trip Advisor, it’s also recommended by locals. 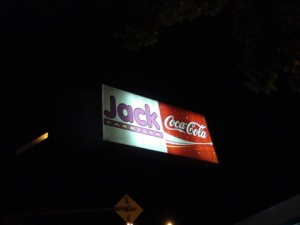 The restaurant itself was your basic local parilla with the most glaring fluoresent lights ever.   We’ve noticed this is pretty typical of local parillas.

It was funny to eat a delicious steak, drink a bottle of really good malbac, and have great attentive service all while feeling like we were in a doctor’s examining room. 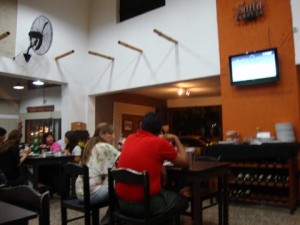 It was in sharp contrast to a restaurant we had gone to the night before.

Jose Balcarse was also highly recommended by guidebooks.  It was also really good, but I don’t think there were any locals in the restaurant. Even the waitress, who spoke fluent English was from Uruguay.

One thing it did really well, besides the food was the ambiance.  The low lighting and exposed brick walls reminded me of restaurants back home.   The food at both places were amazing. One seemed really authentic, local and inexpensive.  The other – gourmet  and  touristy, but you didn’t feel like you were at the DMV.

You can really see the contrast in the below videos.