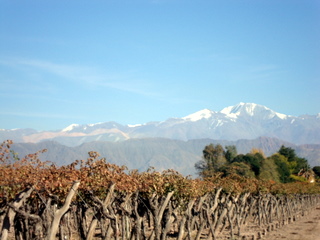 When we planned a day of wine tasting in Lujan our goal was to taste a lot of wine.   We achieved our goal and learned the meaning of the saying, “too much of a good thing.”

Lujan is only thirty minutes from Mendoza, or ninety minutes if you get lost, end up in a traffic jam, get lost again, then end up behind a horse.

Our appointment (all wineries require appointments) with Kaiken was at 9:30.    We didn’t get there until 11:00 which is just as well. 9:30 am is a bit early for wine tasting, even for us.     There was already a tour scheduled, but they were super nice to let us tag along. 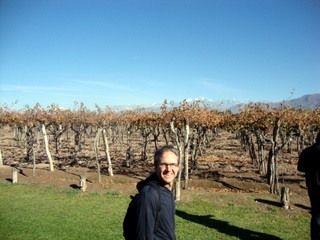 The first taste was straight from the tank. If I knew how much wine was coming later in the day, I would have skipped this one.

The following tastes were really good and plentiful.   Kaiken has some really great wines. 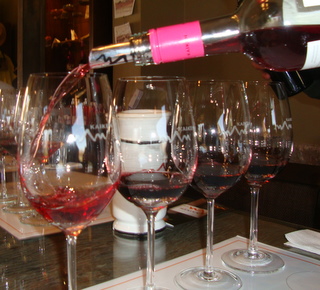 I must have already been tipsy at this point because I insisted we buy two Kaiken wine glasses.  I’m sure two fragile wine glasses won’t be too hard to pack in our already stuffed suitcases.

By this point it was good we had already agreed that Jeff would be the designated driver all day.   Jeff was completely sober before getting in the car, all day long.   The same could not be said for me as a passenger.

Next stop was Ruca Malen for a luxurious five course meal.  The lunch cost $100 US for both of us.    In Argentina that is a lot of money and for us on this trip it’s a lot.  We debated for days prior if we should do it or not. 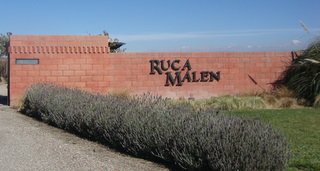 You would think this was a government facility instead of a winery with the amount of security they had.  A security guard had to radio someone to confirm our reservations before opening the gate.

Once we got there and saw the view, we didn’t have any doubts about lunch.

Course #1 – corn soup served with chardonnay.  This was pretty good.  The wine was better than the soup.  I’m never crazy for soup where I need to floss afterward. 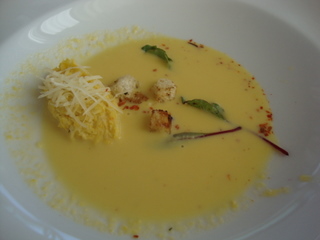 Course #2 – sweet potato and meat empanada with some kind of sauce, served on a fancy piece of wood, with a cute little shot glass of sauce. Served with a cabernet.   This was my favorite part of the meal. It was super good.

Course #3 – honestly, by this point I had already had too much wine. They were pouring my 3rd glass, a syrah, while I was still on my 2nd.   At this point I wish I had remembered you don’t need to drink the entire glass.   Tasting is just fine, and chugging to catch up is not recommended.   The 3rd course was called a “creamy roasted aubergine croquette” also known as a giant french fry stuffed with eggplant.  I loved it, Jeff not so much. 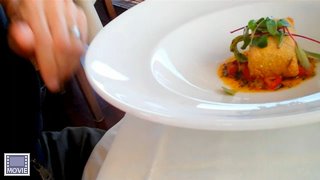 Course #4 – they switched to larger glasses and larger pours at this point.   Our food was some kind of steak with a side of blueberries and stuff.   There were two glasses of wine with this course, both reds, both good.   At this point I had had so much wine that I didn’t even mind when I bit into a blueberry, a bug crawled out and onto my face.   Normally that would have caused a freakout on my part, but instead I just brushed it onto the ground and stomped on it.

Course #5 – OK this was the first course that I thought was stupid.   It was a glass of ice.   Pretty, but dumb.   Wine didn’t come with this course which was good because I needed the glass of ice break to catch up on the wines I was behind on.

Course #6 – this dessert was awesome. It was some kind of white chocolate thing. It was served with champagne which I did not drink. By this time I realized it was time for me to stop drinking.

Course #7 – finally, just coffee!   Some cookies and blobs of sweet stuff came with this course. 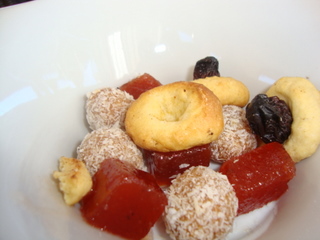 I think this dinner was supposed to take three leisurely hours.  We were so hungry going into it we somehow ate and drank everything in an hour. This was a mistake since we were not feeling so hot afterward.    They had some chairs outside the restaurant which I sat in to take in the view.   Later Jeff woke me up to tell me it was time to go.

Now this would have been a very good time to go home. But, when a rental car costs $100 a day, you have appointments at two more wineries,  and you are marathon wine tasters, you don’t let a little mid day hang over stop you.   As soon as we were rested and 100% sober, we were back to the car.

Next stop was Lagarde.  Our appointment was at 3:00pm, but Jeff called them to tell them we would be late due to his wife being in a food coma.  They were nice enough to let us come at 4:00. 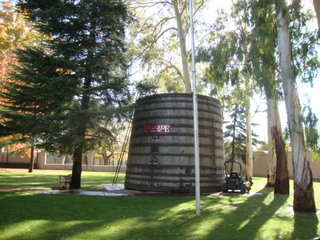 There was quite a lot of good wine to be tasted at Lagarde. 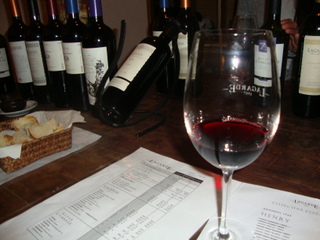 Our guide was super nice and happy to pour us as much as we wanted, but we had to cut her off.  That’s the first time I’ve actually liked the wine and had to beg NOT to try it.

And then it was off to yet another winery. Clos de Charcas. 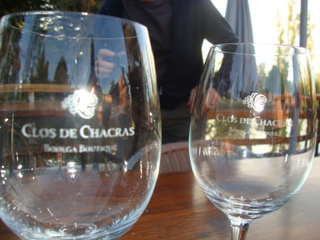 We shared a tasting here which was a good move since even sharing was more than enough. 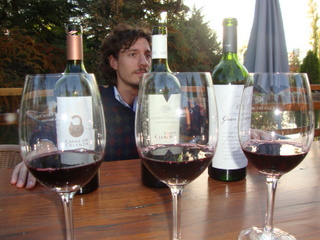 The outside patio was really nice and reminded us of some wineries in Washington State. Although, in Woodinville they don’t usually have to top their hedges with barbed wire.

After this winery we went home and took a very very long nap.    Wine tasting in Lujan is really fun and I’m glad we did the fancy lunch. But, I wished we had taken our time with it and not visited four wineries in one day. I never thought I’d say it, but it was too much wine.

12 thoughts on “Lujan Wine tasting – overdoing it in Lujan”