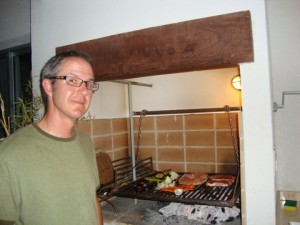 The Argentinian grill looks sort of like a built in shelf under a chimney.   The giant rack comes with a crank, so you can adjust the height of the grill over the burning wood. 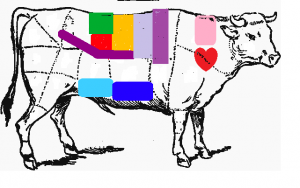 We’ve tried it several times.  For the first one, I started slicing veggies and salting the meat around 8:00pm.    It took slightly longer to light and cook the meat than intended. We sat down to dinner at 1:00am.

But, since that first attempt, Jeff has gotten quite adept with the grill.    Several things are different about our asadors (the name for the actual barbecue as well)  versus the traditional ones.    1. Number of people attending – traditional asadors have lots of people. Since we don’t know many people here, the largest one we had was attended by three people, Jeff, me and our friend Stephanie.

2. Order and kinds of meats – traditionally there is a specific order which starts with organs, then sausage, then meat.   The order in our asadors is  sausage, meat, chicken, veggies, usually more veggies than sausage, no organs at all.

3. The cook knows what he’s cooking.    Our method of obtaining the meat  is to go to our local butcher.   We always prepare ahead of time with a list of nicely translated words for cuts of beef.  But, we either loose the piece of paper, or get confused when the butcher starts talking fast.
I then say “parilla” several times and point to the case of meat.     The very nice and patient butcher cuts me several different cuts of meats.    We bring them home and look them up on google.   This last time we came home with what turns out to be  flank steak,  rib cap and something that was delicious, but no idea what cut of beef it was.   So, until I can find a definition for queperi or learn to pronounce it in a way that people can actually understand me,  the queperi portion of the cow will go uncolored. 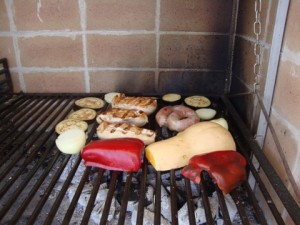 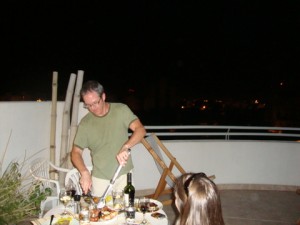 2 thoughts on “Eating an entire cow (not in one sitting) part 9 – Rib cap and queperi?”