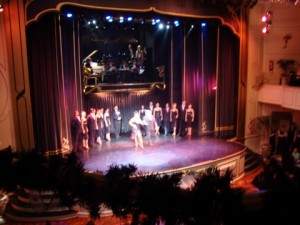 There are several ways for tourists to see tango in Buenos Aires.

1. on the street in San Telmo and La Boca –  We did this and it left us wanting more.

2. Milongas – the real deal tango bars – We didn’t go to one of these and so wish we had.

3. Tourist tango shows – We went to one of these and kind of wish we hadn’t.

The one we choose was highly recommended by the guidebooks and on Trip Advisor.   We got there, were seated and immediately brought bottled water, an emapanada and red wine.  The tickets were expensive by Buenos Aires standards, but with these extra it seemed like a great deal.

The show started. The dancing and singing were good, but it reminded me of the Donny and Marie show with singers, lavish dance numbers, and a Carlos Gardel impersonator. It lacked the passion and intensity you can see on Dancing with the Stars.

We weren’t allowed to videotape but could take photos without the flash. 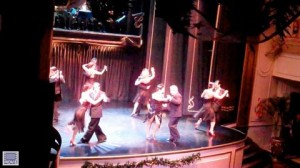 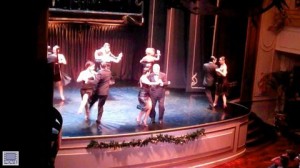 The show was boring except for one sexy really good dance.  Unfortunately, it was at this moment they brought us the bill. Turns out the water, wine and empanada weren’t free .  Jeff signed the bill as quickly as he could. He would have signed anything to get them to leave and let him watch the one good dance of the night.

The people next to Jeff were singing along to every song, so I think it was a good show, just not our thing.  When it was over and the lights came on, I chugged ever last drop of wine and stuffed Jeff’s left over empanada into my mouth.  Since we had paid for it, I wasn’t about to let them go to waste.

So it turns out even someone that loves all things touristy, doesn’t really like tourist tango shows. But, you can’t love everything.    Although I did absolutely love the street named after Carlos Gardel and the statue. 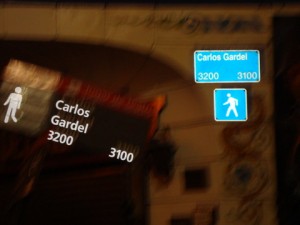 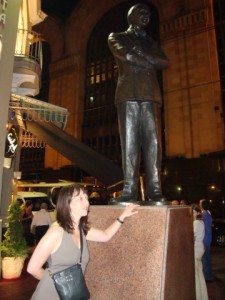 Next time we’re in Buenos Aires we’ll try a milonga. 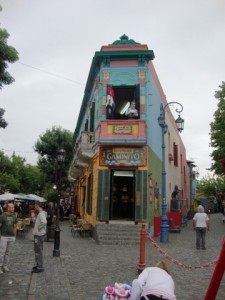 Jeff and I are very different kind of travelers.  I am a full blown tourist.  Jeff is a true traveler.   This difference isn’t too apparent until we go to something touristy.

La Boca is such a place.  La Boca is a neighborhood in Buenos Aires that is rich in history. Tango started in this barrio in the bordellos in the 1800’s.    The area is still “rough” according to the guidebooks, but a section of the neighborhood has been turned into a tourist destination.  There are brightly colored buildings, street vendors, outdoor restaurants with continuous tango shows, and artistic statues of people. Due to the warnings that the area around the tourist section was dangerous, we decided to take a tourist bus there instead of try our luck with the local buses. 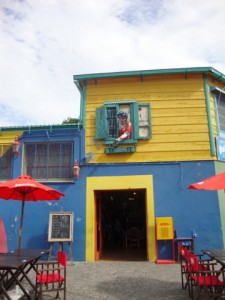 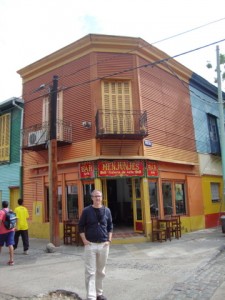 This chart shows the difference in our travel styles when faced with different situations.

I don’t know if one travel style is better than the other, but I do know one of us had a hell of a lot more fun that day. 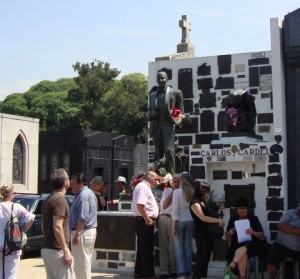 One of the biggest things to see in Buenos Aires is the Recoleta cematery.    But, we are Recoleta cemetery challenged.  The first try we took the wrong bus and ended up at a polo stadium. On the second try we walked. By the time we got there we had heat stroke, and the cemetery was long closed for the day.

So instead we decided to go to a different cemetery,  Cemetario de la Chacarita.   Not only is it the biggest cemetery in South America,  the world famous tango singer Carlos Gardel is buried here. 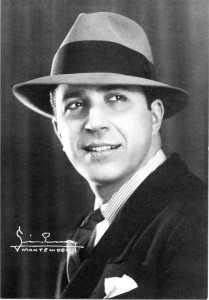 And, you can get there by subway.

It was his birthday, (He lived from 1890 – 1935 when he died in a plane crash.)  so it seemed fitting to visit his tomb.   It sounds strange to visit a cemetery, but his gravesite was anything but somber.

The cemetery is enormous. Each tomb is like a little house, rows and rows of them, it was like a small city with streets and blocks of granite and marble tombs. 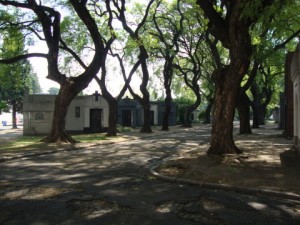 Here’s a video of our entire trip soup to nuts.