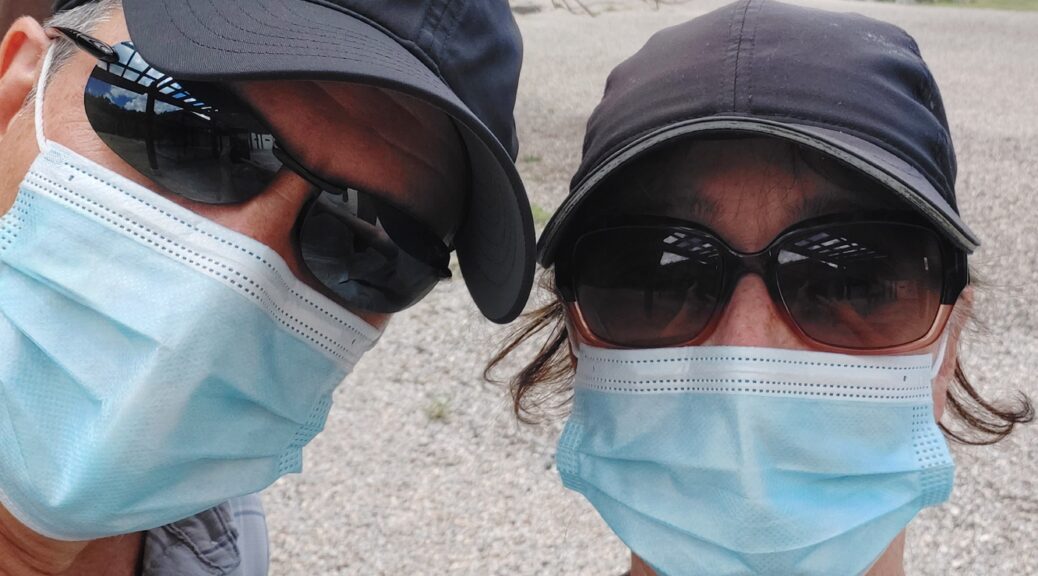 It’s weird that we have spent most of our time in Panama in a pandemic. But, we’ve been extremely lucky to be safe, healthy and employed.

The vaccine is slower to roll out here than in the U.S. but while we wait (me more impatiently then Jeff) I’m reflecting at how much different things are now vs. a year ago.

Panama had one of the strictest quarantines in the world. The below chart (taken from a site called Our World in Data https://ourworldindata.org/) shows the level of restrictions compared to the US.

It started out the same here as everywhere. We thought it would be over in two weeks.

Here we are learning the pool was closed (or auditioning for most overly dramatic expats ever). Imagine our faces if we had known it would be a bit longer than two weeks.

When they started boarding up the stores we got a little nervous. Would there be looting? Riots? Toilet paper shortage?

And then came Women and Men days

When they divided the week up into women and men days we became concerned. When we found out you could only go out for two assigned hours on your day we freaked out.

Based on the last digit of my passport and being female, I had 8:30-10:30 M,W,F.  Jeff had 7:30-9:30 Tue and  Thur only. For once, being a woman came with some advantages. Men having less hours than women is probably whey they expected rioting.

What happened if you were transgender or non binary? Sadly, you might be harassed or arrested.

What happened if you were out at the wrong time or day? You could be fined or even arrested.

How did they know if you were out at the wrong time? There were police checking your documents to make sure it was the correct time. If you went to a grocery store at the wrong time they would not let you inside.

But if living in another country teaches you anything, it’s to be adaptable. We started having our food delivered online.

Since we were only allowed to go grocery shopping during our two hours on our day/times out I walked to the grocery store, the far away grocery store.

We thought we’d get fit during the pandemic

In our spare time,  which was all the hours, we climbed up and down the fire escape.

Then an email went out to the entire building saying no one was allowed out on the fire escape unless it was a declared emergency.

No problem, we had long hallways. a parking garage and balcony .

Who wouldn’t want to workout in a parking garage in 90 degree heat? And it was only 38 times back and forth on the balcony to equal a mile.

I even bought a Door Gym.

This worked great we used it every day and got super fit. hahahaha. Not. I tried it once, was afraid I’d break the door and poke an eye out.

We only went a little nutty

Soon we found that exercise was overrated. There is some research that shows that exercise helps to alliviate stress, but we seemed to be just fine.

Buying these highlighters were probaby the highlight of the pandemic for me (excuse the pun). I spent an entire day doing a photo shoot with them.

Worst than not beling allowed out of our apartment building? Alcohol sales were banned throughout the country.  Yes, banned!  Why? We think they wanted people to spend money on food not booze, and it would help keep people from getting drunk and breaking the quarantine laws.

After our wine and gin was depleted we had to go into stealth mode. The local mini mart still had a healthy stock of liquor.   Sure they had signs saying they couldn’t sell it. But Jeff is nice and good at Spanish. He talked them into selling us a secret bottle or two.

In theory you were not even allowed to drink alcohol in your own home.

That was one law we had to break.

We had friends to break the alcohol law with

Lucky for us, the only friends we have in the entire country, happen to live in our building. We could hang out with them without breaking quarantine.

Rolf and Samuel were friends before the pandemic, but in the last year they have become like family.   We have spend countless evenings, holidays, and many bottles of illegally purchased alcohol together.

Not only are they great people they are fantastic cooks and hosts.

Dinner at our apartment is a more informal affair.

As things got better, parks opened up. I was able to walk out here on women’s day. I was also lucky that my assigned time was early in the morning before work started and before it got too hot outside.

Finally, after months of only being outside seperately, they lifted men and women days and we could venture out together.

So yes, we came to Panama and then were in lockdown for a year. But, we’ve stayed healthy and employed, been able to Zoom with our family and friends, and have friends here.

Restrictions have lifted but the vaccine is slow to rollout . Currently to be eligible you have to be sixty and above.

We are venturing out slowly and safely. And to answer the question of what’s next? We really don’t know. Our #1 priority is to get vaccinated and see our families. After that we hope to return to Panama and do the trip we planned pre-pandemic. So we’ll see. In the meantime we continue to wait for the vaccine here in Panama City

Jeff: Look at this view. Enjoy it and be patient.

Sheryl: Hurry up with the damn vaccine already!!!!!!!

7 thoughts on “Panama in the pandemic”