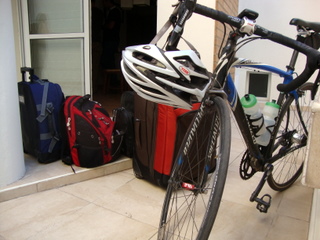 In Seattle we lived in the same apartment for 17 years.

In Argentina we will have lived in seven apartments in six months.   Why so many?  Location, security, bugs, mold, more bugs, more mold, and most important WIFI, or lack of WIFI.

Why furnished apartments, not hotels or hostels?    We have lots of stuff, need lots of room and we like cooking.  This is different than most travelers that go from hostel to hostel.  It’s also different from expats who either buy a house, or rent one unfurnished apartment and stay there.  We’re either super fussy, high maintenance travelers or expats with attention deficit disorder.

Here’s a rundown on all the places we’ve called home so far: 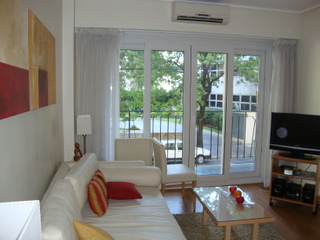 negative – mildew smell in all the cabinets, drawers and closet.   Small kitchen, or so we thought at the time. Now I think of that kitchen as a mansion kitchen.

highlight – making coffee for the first time in what I thought was a mini kitchen. 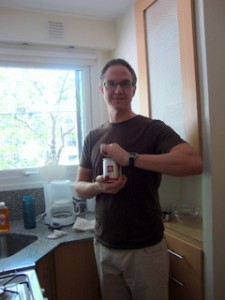 low point – every time I opened a drawer and almost passed out from the smell.

negative – smelled like inside of a raid can mixed with truck full of moth balls. Furniture must have come from a store called Grandma’s Moldy Basement

negative – can’t use hot tub when you don’t have hot water (5 days) when it rains (every day) awnings fill with water, dumps on your head hours later when sitting near them having nice dinner.  No screens on doors = bugs, lots of bugs.

low point – the day I made Jeff kill Bruce, our loyal pet bug.  We had tried to take him outside to freedom. But, like a dog, he always found his way back home. We missed him once he was dead.

positive – overlooking the ocean, can hear the sound of waves from the apartment.

highlight – sitting on our balcony, drinking coffee and eating pancakes. 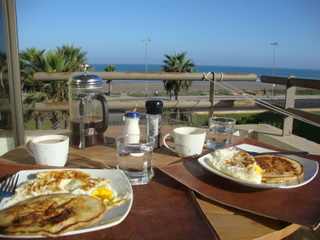 highlight – our landlord invited us to a family BBQ, so nice to be included in family get together.

code name -The House of Near Misses

low point – almost getting mugged a block from our apartment.  Elevator almost breaks with me in it. Next day sign goes up saying building not responsible for elevator accidents.  Very nervous our large security deposit won’t get returned (it did).

Since we just moved in we don’t have a code name yet.  So far it would be, “The internet works, it seems safe, no bugs or weird smells. Yippee!”

negative – none yet, but we’ve only been here two hours. I’m sure something will come up.

I’m changing the name of my blog to “Sounds Good on Paper.”

The reason…because all travel sounds good on paper, at least to me.     We’ve done so many things that sounded so good on paper.  It’s funny how the fantasy of travel can be so different than the reality. Not that it’s worse than planned, but almost always different.

Here are some travel related things we’ve done that sounded so good on paper and turned out so differently than planned.

1. Live in Italy for a year on a tourist visa.

On paper – We’ll move to Italy with eight pieces of luggage, a tandem and tourist visas.  We’ll hop over the border every three months to renew our visa.

Reality – Turns out after three months you have to leave Western Europe all together for the next three months. We ended up moving to Malta. I had never even heard of Malta before moving there.

2. Take a tandem bicycle to Europe.

On paper – We’ll take romantic rides all over Italy, have picnics.

Reality – Tandems are long and don’t fit in most rental cars and no taxi’s. Winter in Italy is not a good time to ride a bike.  Malta and Sevilla are not good places to ride tandems.  It took us eight months and a move to northern Spain before we ever went for a bike ride. 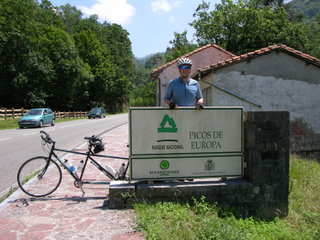 On  paper –  The chance of going crazy from the malaria medicine is small.   Besides, if either of us goes crazy we’ll see warning signs and stop taking the medicine.

Reality – I pretty much went crazy overnight. Poor Jeff had to deal with Thailand, Malaysia and a crazy wife who couldn’t function for over a month.

4. Visit a monkey forest in Bali

On paper – We’ll see amazing temples and baboons in a sacred forest.

Reality – I got in a fight with a baboon, Jeff took the monkey’s side. I’m still mad about it.

On Paper – We would take a week long intensive language course.  We’d learn the language for a richer, local experience.

Reality – I had a panic attack on the taxi ride to class, and it went downhill from there. Turns out Thai is really hard.

6. Travel through southern India in April

On paper – Off season is the best time to visit India. Sure it’s hot, but we’re from Chicago. We can handle hot and humid.

Reality – No we can’t.  India is a special kind of hot, only a few degrees cooler than hell.

On paper – Jeff will ride through idyllic mountain roads with malbec vineyards and gauchos.

Reality – The bike suitcase is too big to fit in taxi’s and buses .  The idyllic roads are too dangerous. He’s told he will get mugged and the bike stolen if he rides on those roads. 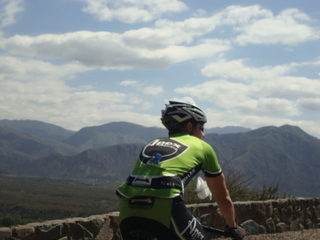 On paper – We’ll rent a cheap apartment in Argentina.  On weekends we’ll fly to all the other countries.  It will be so cheap it will almost be free.

Reality – Airfare is expensive.  South America is big.   Buses are cheap, but 50 hours on a bus on way? I’m too old for that.  We’ll see those other countries on some other trip.

9. Ride an elephant in Thailand

On paper – We’ll sit in a little chair on an elephant and ride through through the forest, cross a river, laugh our heads off

Reality – No chair on elephant, Jeff told to stand on elephant’s neck, elephant doesn’t like Americans standing on its neck, begged to get off elephant after five minutes. Scared to death.

On paper -We’ll camp on deserted sandy beach, no one in sight, just us and the sea.

Reality –  Spent first night with locals driving up and down beach in a pickup truck yelling at us.  Following nights spent looking for biggest, best lit, most Canadian RV to camp next to.