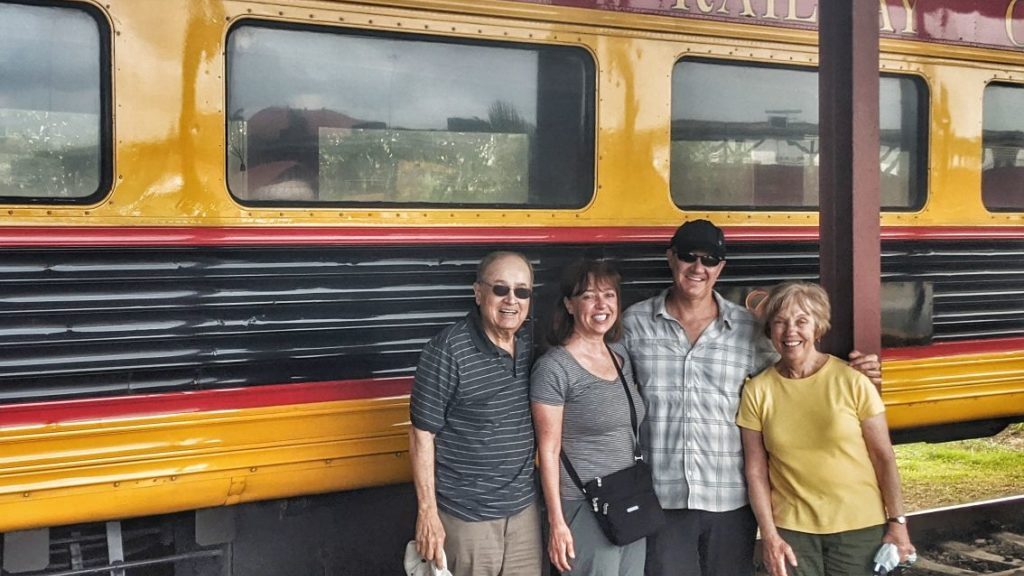 It feels weird to be posting during a pandemic. But, blogging is keeping me from going crazy while stuck inside. I hope everyone is staying healthy both physically and mentally during this crazy time.

We were extremely lucky that my parents were able to visit in early March and get back home to Georgia before things got really bad. They were here from March 1 – March 7 so the things we did in this post are from a few weeks ago. It seems so long ago. Just a few weeks ago the world was a very different place.

In my last post, I talked about seeing the Panama Canal from the Pacific side.

After seeing the Miraflores locks we went out to happy hour and dinner. Immediately several things became abundantly clear:

2. Two for one happy hour drink special takes the sting out of not swimming in a pool on the 66th floor.

3. Everything tastes better when your table glows green.

4. Personal coat racks at your restaurant table are an amazing invention.

5. But most importantly, we needed more canal! The Pacific side was nice and all, but we needed to see the Caribbean side too.

We found a guide and scheduled a tour for the following day. The only catch, we would start super early in the morning.

Getting picked up before the sun rose was difficult.

Our guide Estaban picked us up at the hotel, and drove us to the Panama Railway station. The train was built in 1855 which was even before the canal . It was first used to take people across Panama from the Pacific to the Atlantic.

Once the Americans took over building the canal they used it to move workers, equipment, and dirt across the isthmus.

At the station where we bought our tickets, I found this one bag of coffee on a lonely shelf all by itself.

The train only makes the trip once a day. It leaves Panama City at 7:15 am which is why we had to get there so early.

The really cool car that was all windows was full. But the car we ended up in was still really nice and mostly empty.

We were still pretty tired even as the train got on its way.

The great thing about the train is that you have jungle on side , and the actual canal on the other.

It was at this point in the train ride that even though I had snarfed down half a loaf of banana bread , I was hungry. Lucky for me, they passed out coffee and little snack boxes.

Crackers, nuts,, raisins, a piece candy, and best of all Pringles! And it was all housed in a commemorative box with a really helpful map on the bottom. As soon as I saw the potato chips I knew what I had to do.

After about an hour, the train pulled up to the station in the town of Colon.

It was a small station with many tour guides waiting to do tours. We looked through the crowd and found our guide, Estaban. While we were eating snacks on the train, he was driving to the other side of Panama to meet us at the station.

From the train, Estaban drove us to the Agua Clara locks on the Atlantic side of Panama. I’ll talk about them in my next post.

My parents came to Panama City this last week for a visit. I’m pretty sure they came to see the Panama Canal, but we just happened to be here too.

Our building has both apartments and a hotel. Since our bathroom doesn’t’ have walls, and sometimes smells weird, they stayed on the hotel side. We did have them up to our balcony for appetizers and to see the boats waiting to enter the Panama Canal.

On the first day of their visit, we went to Casco Viejo which is the old part of town with lots of doors.

Since I didn’t read the guidebook first, every church we went into I thought was the cathedral. This statue was particularly interesting.

The cooling tie is a product (I bought mine from REI) that you soak in cold water and wear around your neck. It stays cool for hours, and so do you. At least this is what our friend Brian and my parents have told us. I have mocked them for years for their cooling tie usage. But when it’s 101 heat index, it was time to don the cooling tie. And I have to say, it really did work. Jeff still had some dignity and refused to wear his.

It was around this time, that Jeff may have become nervous about the upcoming week.

The next day we got up early and took an Uber to the Miraflores locks. This is the locks on the Pacific side of the Panama Canal.

The viewing platform was crowded but we found a spot to watch a ship filled with windmill blades transit the Miraflores Lock.

Ships take a LONG time to get through the locks.

The boat was still in the locks when we realized we would all have heat stroke if we had to watch it go through completely. Inside the visitor center, they had a great museum that explained the history and workings of the canal.

But the best part was where we could pretend to actually drive a ship through the Panama Canal.

This is what this guy’s hair looked like six years ago when Jeff and I visited.

Next, we went to the IMAX theater for a really good movie about the canal that was in 3D. Morgan Freeman was the narrator. Between his soothing voice, heatstroke and comfy chairs it was hard to stay awake.

And then we were all canaled out and headed back to Panama City via Uber and went out to dinner.

There is a really fun website that shows the boats going through the canal, and ports around the world.

Here’s a webcam to watch boats go through the Panama Canal in realtime.

This book is excellent. My Dad and I both read it and learned a ton about the history of the canal.

The Path Between the Seas by David McCullough

If you are going to visit the locks this site has all the info you need:

I can’t believe I’m doing this, but I am recommending cooling ties. This is the one I bought and really liked.