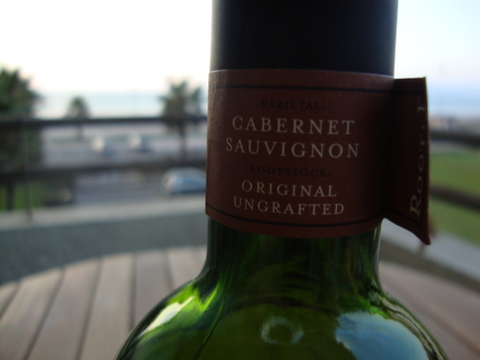 After three months in Argentina and less than two weeks in Chile I’m not exactly an expert on either country.  But, I’m going to pretend I am and tell you all the differences I’ve seen so far.

Wine – the wine is good and cheap in both places.  Argentina was all about malbec.   Chile is all about cabernet sauvignon.  Luckily, we like both…a lot. 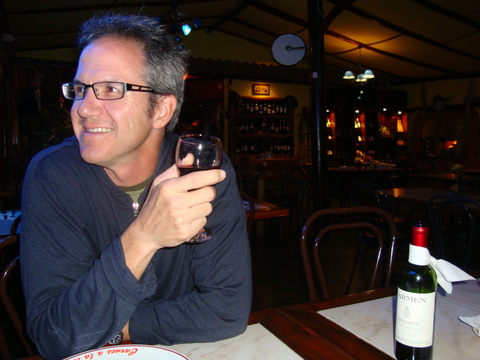 Cheek kiss – In Argentina they cheek kissed all the time, everyone men and women.   Jeff was never completely comfortable cheek kissing other  men, but after three months he got used to it.  He did it enough that it became automatic.

On our second night in Chile we ran into our taxi driver from the day before in a gas station.   He kissed me hello, chatted and he cheek kissed me goodbye.    Then a week later we were signing our lease in La Serena.  As he was leaving Claudio, our rental agent cheek kissed me.  He shook Jeff’s hand and Jeff automatically cheek kissed him.   It was totally normal, our Argentinian landlord was constantly cheek kissing Jeff.

Claudio pulled back, laughed and quickly explained to Jeff that in Chile men only cheek kiss women, not other men.   Jeff was embarrassed, Claudio amused and I almost died laughing.

Stop signs and lights – Chile has them, Argentina doesn’t.    After three months I still never knew how to cross the streets in the big city of Buenos Aires to the smallest little town, I just sort of waited for traffic to clear, said a little prayer and ran across.  In Chile there are actual stop signs and lights, and even walk signs. 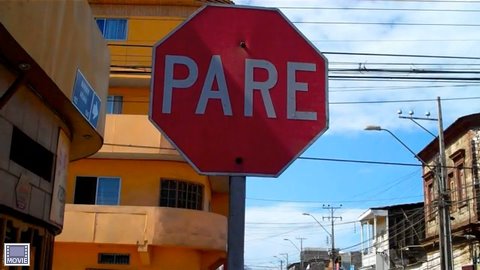 Butter – Both countries eat a lot of bread. In Argentina they do not eat it with butter, at least not in restaurants.  They serve it with different kinds of saucy spreads which are good. But, if I’m going to ruin my diet with a bunch of carbs, I like to include fat grams as well.

Money – you need it in both countries. In Chile you need more of it. Chile is much more expensive than Argentina, at least as a tourist.   But even more crazy is the exchange rate.  Argentinian pescos are 4 to one US dollar.   That got a little confusing, but even I was able to figure that out without a calculator.  Chilean pesos are  480 to one US dollar.  That is something I can’t do in my head. I can barely do it on a calculator.

Peanut butter and granola bars – You can get a surprising amount of US type things  in Argentina and Chile – oatmeal, cereal, granola, potato chips, etc.  But some things you just couldn’t get in Argentina. Peanut butter was one.  US style granola bars were another.   This brand has an entire display in the grocery store with all kinds of US type products. 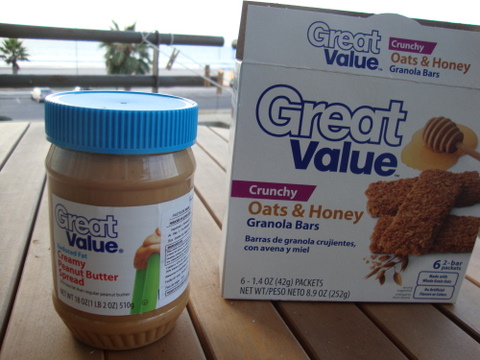 Empanadas – They have them in both countries, but  they are very large in Chile.  The first time we had them in Chile we ordered 5, the normal amount we used to order in Salta.   The waitress must have been laughing her ass off when she prepared them. Five empanadas is enough for a family of 4. They are huge.

Meat and seafood – This is obvious, but the meat in Argentina is amazing. The sea food and fish in Chile is amazing.

They still have weird looking mannequins like in Argentina. 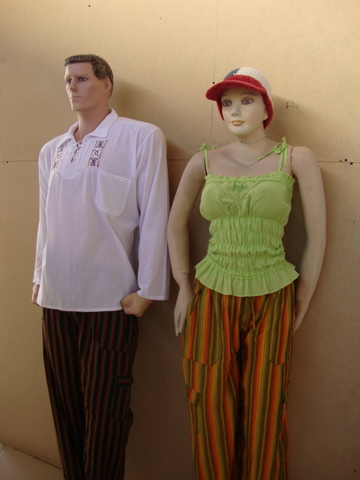 This I think was a one off.  I haven’t seen this anywhere else in Chile or Argentina. 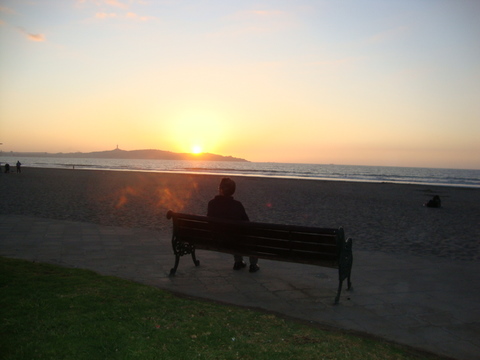 …but it took awhile.   We spent so much energy and focus on how to get us and all our luggage to La Serena, we didn’t spend any time figuring out what to do when we got here.

La Serena is a beach resort town with miles of beautiful beach and lots and lots of tourist apartments.

We bounced into town assuming that a perfect apartment would fall into our laps. We rented a hotel, got on the internet and started looking.    We learned several things quite quickly.

1. February is prime vacation month in Chile.  The tourist apartments are full.

2. Few tourist apartments have the internet.

3. Tourist apartments in a beautiful resort town are quite expensive.

It was like showing up in Daytona Beach, Florida during spring break and trying to rent a cheap apartment.

Worse of all, our hotel only had instant coffee!!!  Since we were spending all our money on the hotel, we couldn’t even go out for real coffee. 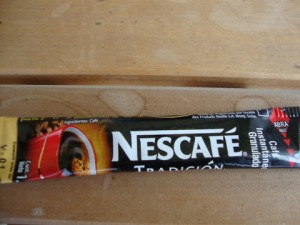 You expect me to drink instant? But were from Seattle.

Between freaking out about how much money we were spending in hotels, choking down instant coffee, and searching for apartments, we barely even glanced at the beach. 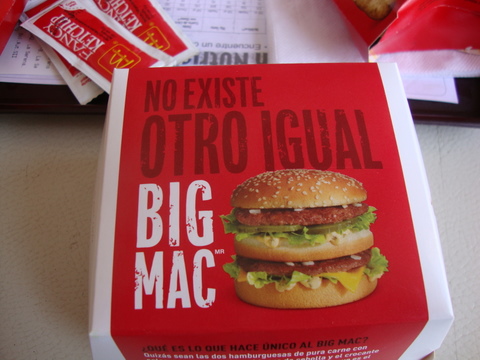 We knew we had to do something drastic.  So, we went to McDonalds.This was the first McDonalds we’ve been to on the entire trip, not because we’re only eating local food, more because McDonalds was weirdly expensive in Argentina. 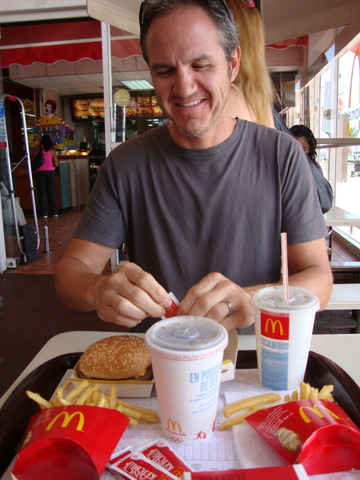 That Big Mac and fries did wonders to reset my travel barometer.   A little culinary visit to the USA and I was ready.  Not only was it delicous, it left me a little sick and ready to get back to really “being” in Chile.

After that magical trip to McDonalds things really did start to fall into place.   Jeff found one last Via packet (Starbucks “ready brew” coffee) hidden in his suitcase.

We found an apartment that was almost affordable, we rented a car, bought groceries, and most importantly, bought a French press.

And then we finally noticed the beach.   It’s funny how easy we get caught up in the details and “problems” of traveling.  When I emailed my friend Dan complaining about the high cost of apartments here I said, “The problem, is we’re in a Chilean beach resort.”  His reply was  “I wouldn’t define being in a Chilean beach resort as a problem.”    And he was right.   It’s so easy to get bogged down on what isgoing wrong we look right past what’s going right. 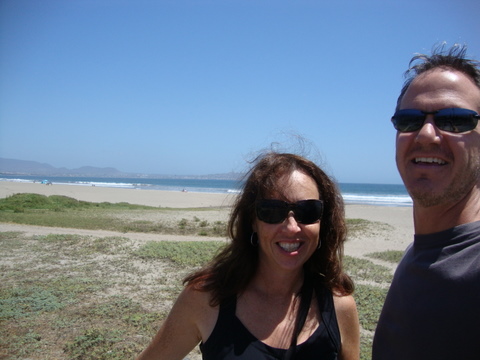 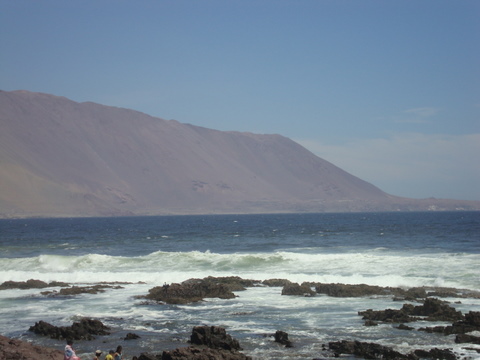 I hate rain.   I don’t like thunderstorms, drizzle, sprinkles, mist, or showers.   So, after 2 months in Salta during the rainy season, a Chilean  desert sounded like a good change.

Everything started well enough.   Our landlord Bernardo drove us to the Salta airport.  Getting Jeff’s bike suitcase into the car was hard.

But it fit and after some hefty luggage overage charges we flew to Iquique, Chile without problems.  When we landed we weren’t allowed off the plane until someone came through the aisles to disinfect us with a can of insecticide. 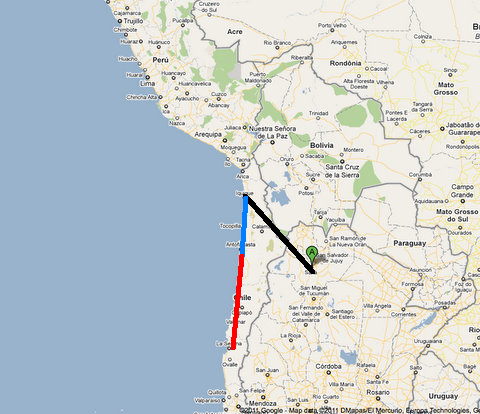 Iquique is in the NW part of Chile. It is on the ocean, but is also on the outskirts of the Atacama desert, the driest place on earth.

The beach was beautiful and the town was full of brightly colored houses against sand dunes.  Being an old mining town it felt like the old west. 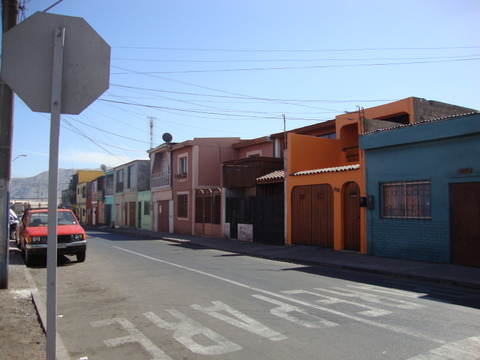 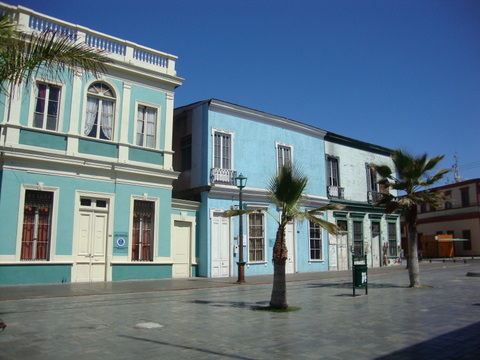 We stopped at the bus station and asked about leaving for the city of Antofagasta the next day.   There were many buses with quite a few seats on each one.  They weren’t sure if all our luggage would make it on the bus which caused me hours of anxiety, but Jeff assured me that with buses leaving hourly, surely one of them could take our luggage.

We left the bus station and got an Iquique beer.

The next day we got to the bus station with all our luggage and what do you know, all the buses were sold out.   Why didn’t we buy the tickets the day before when we were at the station? Good question. This is why we can’t be on the show Amazing Race.

Another day in Iquique would have been fine except we had a non-refundable hotel and flight out of Antofagasta for the next day.    I stayed with the luggage while Jeff went on a reality TV type “challenge.” Find us a way out of town.  Two hours later he returned with Chilean cell phones for both of us and a rental car. Maybe he could be on Amazing Race.

The drive from Iquique to Antofagasta was amazing.  For seven hours we had the coast on one side and dry desert on the other. Besides a few small mining towns along the way there was no signs of life. No trees, grass, tumble weed, birds, nothing.  This desert never gets rain, N-E-V-E-R. Entire years go by with no rain. After 17 years in Seattle and 2 months in Salta during the rainy season, this seemed like a great place to live. 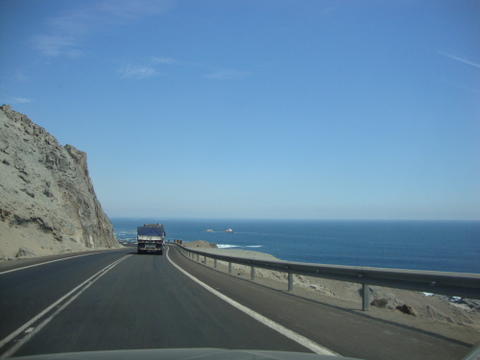 The first two hours were breath taking. Driving this close to the water for hours reminded me of Caramel, CA.  I was ready to move here. 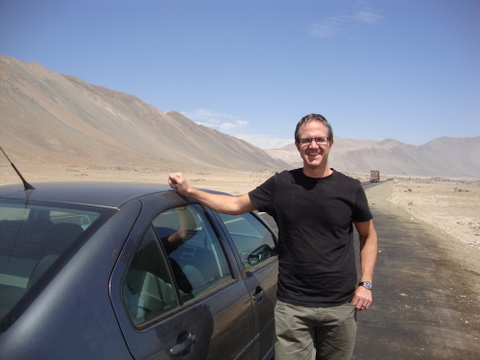 Hours three and four were still beautiful but, I realized that perhaps no plants and animals lived here because there was no rain. And land without plants or animals is kind of stark. 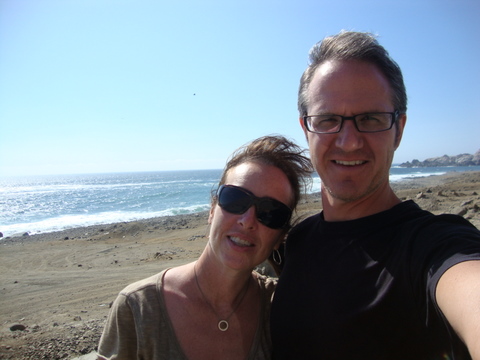 We stopped for lunch in a tiny little mining town where this stray puppy sat by our table. He would have been cute no matter what, but after 4 hours driving in the desert without any sign of live he was especially adorable.

After six hours of driving I half expected a spaceship to land next to the car.  So much land without plants and animals started to feel like the surface of Mars.

It started to feel like a highway treadmill, no matter how long we drove there was just blue ocean on one side, and dry, brown sand on the other.  Once in awhile we’d see a small town flash by in the rear-view mirror. 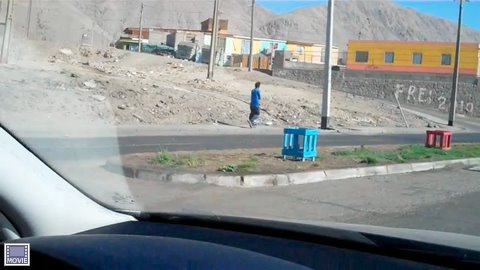 It’s amazing to see these small towns and some really really poor people living with an amazing view, but hard hard landscape.

Then at almost the end of the drive we came across this cemetery.

We drove right by it at first and had to do a double take. It was shocking to see this cemetery with all wooden grave markers in the middle of nowhere. 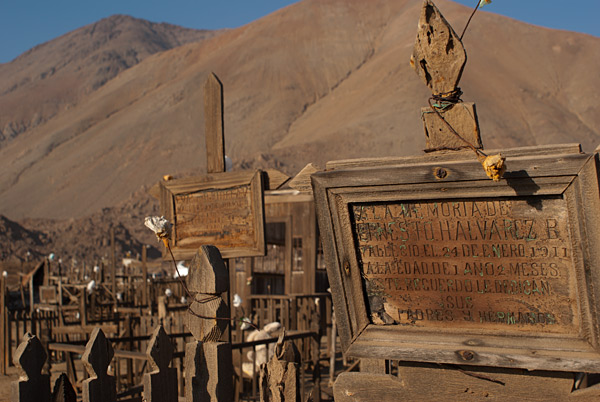 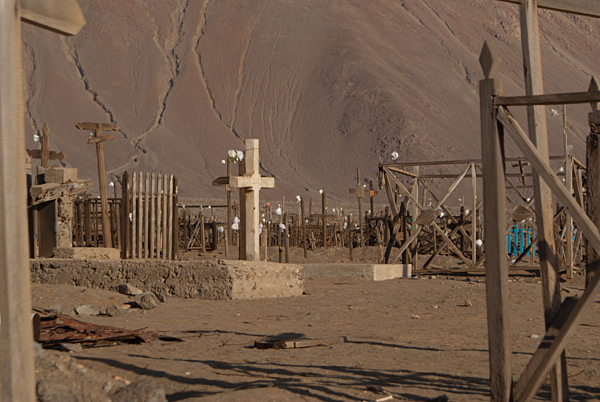 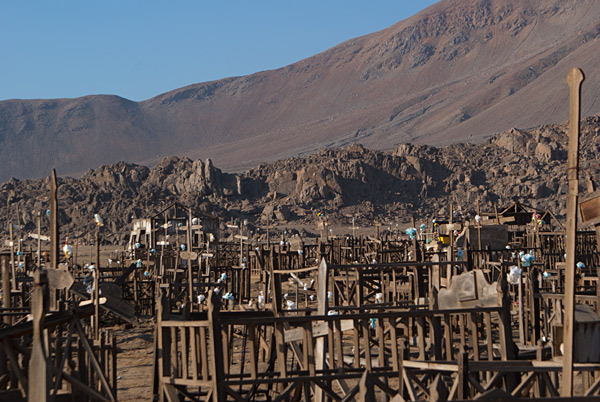 It was a far cry from the elaborate cemeteries we had seen in Buenos Aires.  It was eerie to see these wooden, weather beaten graves in the middle of such  lifeless desert.

Then, after 7 hours, we made it to Antofagasta,  We made the flight the next day and landed in La Serena. We both were relieved to see some grass near the runway.