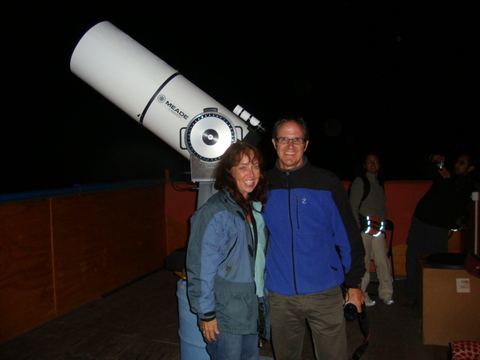 Not being adventurous nor athletic, it’s rare for me to do something completely new. You’ll never hear me say I went skydiving, scuba diving or bungee jumping.    So when we had the opportunity to star gaze, at a real observatory I couldn’t wait.  It was something I had never ever done before.

Chile is known as one of the best places in the world to see stars. Something about climatic conditions and clear skies.  There are several observatories near the town of Vicuna.

We chose Observatario del Pangue.  A minivan drove us from the town to the observatory.   The eleven mile drive felt like eternity.   It was pitch black and the minivan was driving up a mountain on a dirt road with no guard rails. With every switch back I thought the truck would fall off the edge.  I spent the entire ride up thinking,  “They can’t be serious. This isn’t safe. This is not worth dying for. Why did we even do this dumb tour.”

But, then after what felt like an hour we arrived on top of the mountain.  We got out of the car and it was all more than worthwhile.  I actually gasped. How often does that REALLY happen?  The sky looked like it couldn’t possibly be real.   The below photo is from their website. It looked EXACTLY like this.  And this was just standing there.

We were met by Eric, our guide who spoke perfect English. There was only one other couple on the tour, and they went off with another tour guide. So we had our own private tour.  Eric was an astrophysisist who obviously knows his stuff, but was also as excited as we were to just look up at the sky.

I pretty much said nothing but, “Oh my God, this can’t be real.” over and over and he pretty much agreed with me.

It was so incredibly beautiful I had such an urge to take photos.   I knew they wouldn’t come out but I couldn’t help myself.

The first question I asked was, “are those clouds over there?” I pointed to two small smudges off to the left.  Eric explained they weren’t smudges, but distant galaxies.   The below photo is from wikipedia, but this is an enlarged version of exaclty what it looked like.

It was so mind blowing that I actually sort of lost my mind. Next, I saw the coolest star ever, it was red and blinking and moving fast across the sky. I actually yelled out, “Look at that one, it’s blinking.”    It was of course a plane.

Then it was time to look through the telescope.   He would position it and say something like, “This is a very very nice galaxy. I think you will like it.” We got to see nebulas, star clusters, new stars, old stars and dying stars. But still, nothing was as awesome as just standing there seeing the milky way above our heads…until we got to see saturn.  Eric pointed it out in the sky and it looked like a regular star. Then we saw it through the telescope and you could actually see the rings!!! I seriously got giddy.

Jeff on the other hand was unimpressed with Saturn. After all my squealing he was expecting more.

Although, he did agree with me that standing there seeing all those stars was flipping fantastic.

We were up there for 2 hours, it was freezing but I didn’t want to go back down. Those stars were intoxicating.   Now when I look up at the sky I want more, milky way, saturns rings, nebulas, distant galaxies. I really can’t get enough of it.  We might go back while we’re still in Chile.

According to Travel and Leisure magazine, these are the top 10 places to star gaze:

Here’s the link to the article. I don’t know how valid this list is, but you can be sure that if I find myself in one of these places I won’t be white water rafting or rock climbing, I’ll be waiting for darkness to stare up at the sky.