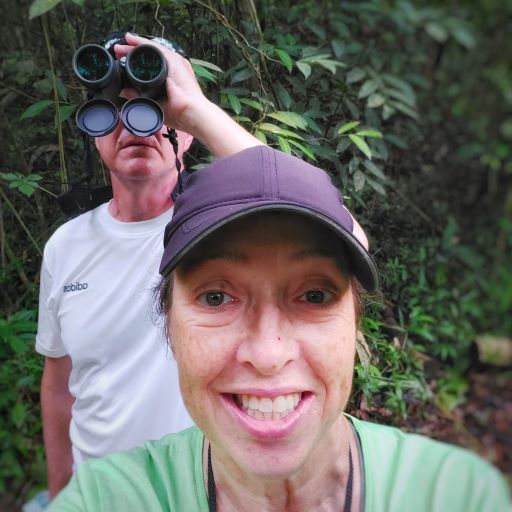 We still haven’t been able to get the vaccine yet, so for my birthday we decided to go away for the weekend to the town of Gamoa and Pipeline Road for some birdwatching.

We know nothing about birdwatching

The town of Gamboa is under an hour away and near Pipeline Rd, a world famous birdwatching area. We aren’t birdwatchers, but here’s what Frommer’s said:

“Even non-birders can’t help getting caught up in the action with so many colorful show birds fluttering about, such as motmots, trogons, toucans, antbirds, colorful tanagers, and flycatchers.”

“Pipeline Rd is considered to be one of the world’s premier birdwatching. More than 400 different species of birds have been spotted on the trail, and it’s fairly likely you will spot everything from toucans to trogons.”

My actual birthday was on a Thursday and was lovely. I woke up to a rainbow.

Our friends Rolf and Samuel brought me a birthday cake and lent us their binaculars.

Jeff brought me flowers which were so pretty I spent an hour taking photos.

Gamboa is close to Panama City

In the 1930’s the US moved the canal’s dredging division to Gamboa and took it over and basically built an entire town that all had the same home model. It’s small, town with all the buildings looking the same, but painted different colors.

Our Air BnB had this really interesting door and cut out windows. When I realized a lot of houses had the same door and window I forgot all about birdwatching and went straight to door watching.

I could have taken so many more pictures of identical doors but Jeff thought someone might think I was casing the neighborhood.

The next morning, we woke up early to the sounds of the rainforest and me complaining.

No Birds, but we did see a rodent

We’ve seen agoutis before. But, what really was a rare sight was the post office. This is the first one we’ve seen in Panama. It may not even actually still be open.

We didn’t see any birds but soon we were on the famous Pipeline road.

The road was paved with gravel and the rainforest was truly beautiful.

No birds, but some cyclists and runners

Still no birds, but we saw butterflies

I soon became frustrated at the lack of birds. But Jeff kept his spirits up.

While we didn’t see birds on Pipeline Rd, there were some amazing butterflies. Jeff took this photo which he very nicely allowed me to use on the blog.

The excitement from the butterflies was short lived.

Perhaps all the birds were waiting to be discovered in the Rainforest Discovery Center. https://pipelineroad.org/en/

The rainforest discovery center has trails and a viewing platform, and a list of all the birds one might see.

Excited to see at least a fraction of these birds, we climbed the stairs. From the top you could see the forest canapy, but still no birds.

No birds, but we saw monkeys

With the help of binoculars and a really nice couple named Pascual and Juana, who were experienced birdwatchers, we saw howler monkeys.

I took a ton of photos. Turns out monkey’s hide really well.

Here’ s a picture from Wikipedia of a Howler Monkey.

Pascual and Juana also pointed out a toucan that we saw through the binoculars so if you only see one bird from the forest canopy, a toucan is a good one to see.

They also explained a lot of birdwatching is luck and patience. They had been here many times and seen birds on other occasions, just not many that day.

On the way back down we saw another tree full of capuchin monkeys. Again, unless they are moving they hide really well. This picture is also from Wikipedia. We could have skipped bird watching altogether and just looked at photos on Wiki.

After seeing only one bird but a lot of monkeys, we headed to another part of the Rainforest Discovery Center where you could see a lot of humming birds, have a professional guide answer questions, and sit down if bird watching makes you tired.

As we sat and compteplated how maybe we weren’t birdwatchers, Carlos whispered. “Guys!, Guys!”

The urgency in his voice had me thinking he must have spotted a panther or poisonous snake. As I looked for means of escape, I saw Carlos setting up what looked to be a camera, but turned out to be a bird watching scope

Carlos called us over. “It’s a mot mot.” We took turns looking through the scope, and sure enough there was a bird. It was pretty, but we both realized at this moment, maybe we weren’t cut out for bird watching.

Not many birds, but we did have cocktails

That afternoon back at our Air BnB I did more bird watching, Zeunert Style from the patio.

The next morning Jeff had to give me a pep talk to get me in the birdwatching mood.

We headed out and saw parrots and another toucan right in town.

We walked over to the Rainforest Lodge which is a beautiful hotel we went to pre-pandemic with my parents. https://gamboareserve.com/

It was so deserted Jeff said it looked like the Shining in the tropics. Once it’s open again we are going back.

And then we rewarded ourselves with breakfast.

So we didn’t see many birds, but if we had come for monkey, butterfly, door and post office watching we saw a ton.

Even though we didn’t see many birds, the rainforest is beautiful, the town of Gamboa is a great get away from the big city and we made some new friends. (Pascual and Juana.)

We will absolutely go back again, especially if we have to mail a letter.